Fargo Davies held a JV meet Thursday with boys athletes from RR, GFC, and Davies. With both the Shanley and Howard Wood meets featuring limited entries, this allowed athletes not competing in those locations a chance to improve. No team scores were kept, but many athletes achieved new PR’s. This was most evident in the 100m dash, where every single athlete managed a new PR behind a generous tailwind. Sophomore Mikey Mallory was the top finisher, clocking 12.17 and inching closer to the Sub-12 Second Club. Most other PR’s came from the throwing crew, led by senior Curtis Masa’s double PR in the shot put and javelin. Joining Masa with javelin PR’s were sophomores Hudson Kilgore (11’5 PR) and Michael Belluk (35’7 PR), as well as junior Manish Jogi (3’5 PR). Kilgore’s toss of 127’5 moves him into the team’s Top Five. Sophomore Kellen LaFountain managed a 10’5 PR in the discus; the only RR athlete to improve in the event. Sophomore Jack Bachman and freshmen John Bjerke are currently leading an investigation into whether or not the Davies discus rings are regulation-sized. We hope to have their full report by the end of the season, so we can lay this conspiracy to rest once and for all.

In what was likely the largest meet held thus far in the eastern half of the state, eleven teams gathered at Fargo South HS Friday for the Shanley Invite. Once again, strong winds prevented many athletes from achieving lifetime PR’s. Nevertheless, the Riders competed well and used their overall depth to place third as a team.

Sophomore Logan Arason continued his outstanding season Friday, winning both the javelin (172’5) and discus (144’4) events. That brings his season point total to 106 points, which leads the team. Senior Carter Stinson also had a nice day, placing second in the HJ (5’8), fifth in the LJ (20’0.5), and running a leg on the third place 4×400 team (3:43.78). Joining him on that relay was junior Tanner Schiller, senior Morgan Hoefs, and senior Sam Kruger. Kruger anchored the relay in 53.9 seconds, which is the second-best replay split on the team this season. Kruger also anchored the 4×100 (46.00) to a fifth place finish.

The Dakota Relays are held annually at Howard Wood Field in Sioux Falls, SD. The meet brings together some of the finest competition in the Upper Midwest and includes more than 3,000 athletes from multiple states. The meet is bigger and arguably more exciting than the North Dakota State High School Meet. The first event for the Riders on Friday was the 4x800m relay, where the team came in with the #2 seed behind Bismarck Century. With an outstanding collective effort, the boys held seed and finished in second place, while improving their time to 8:09.22. That relay performance is #13 in school history. 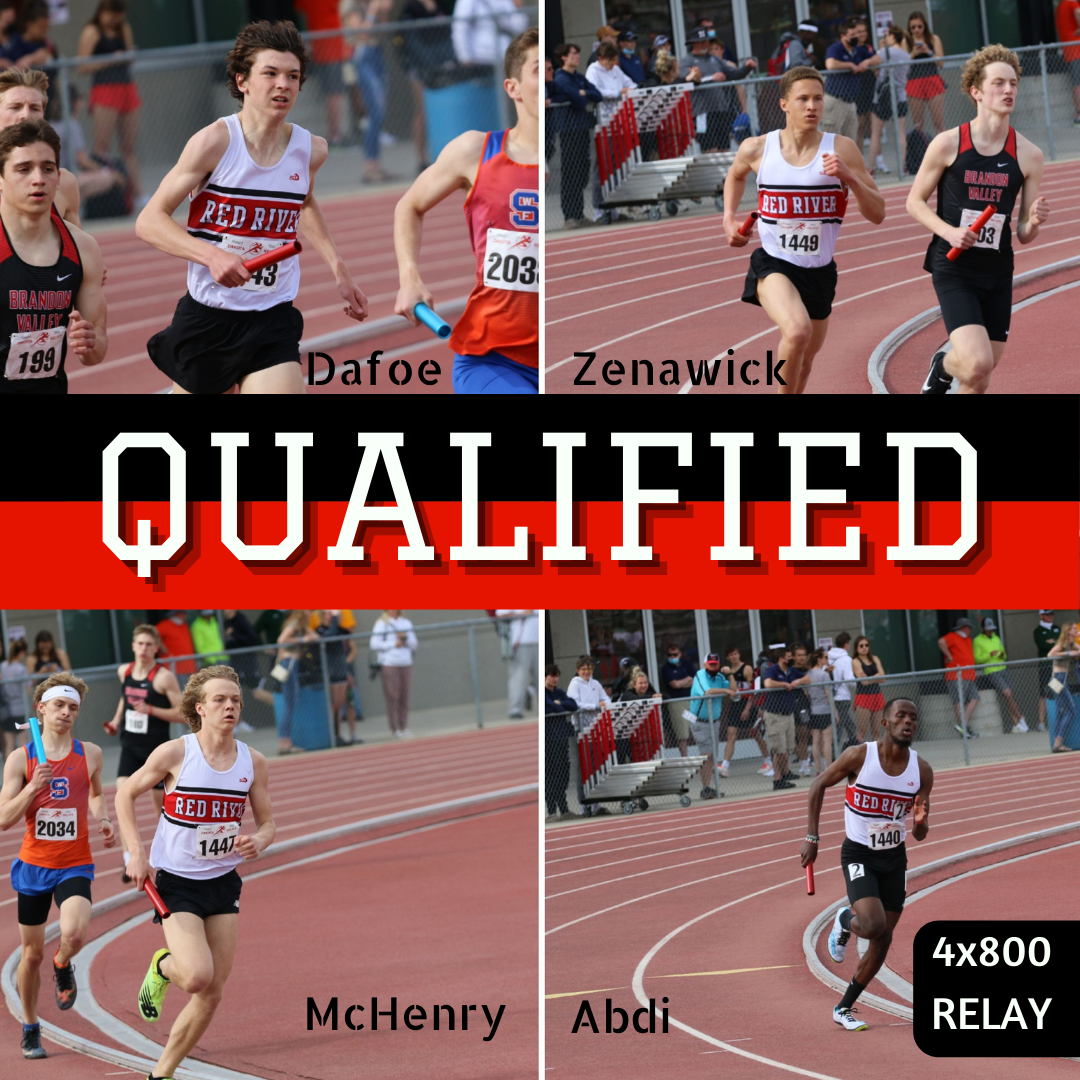 The only other event Friday was the sprint medley, where sophomores Carter Byron (200m) and Lukas Heydt (200m) teamed with seniors Broden Diederich (400m) and Ryan Prusak (800m). The quartet finished in a time of 3:52.62, which is #8 all-time at RRHS.

In what might have been the deepest 3200m field ever assembled in ND or SD, Hunter McHenry ran a phenomenal time of 9:38.34 to set a new junior class record Saturday morning. That moves him to #4 on the all-time lists. Despite the outstanding effort, McHenry only placed 11th in the race, mainly due to the unprecedented collection of distance talent in the state right now. Athletes from ND dominated the race, placing 1-6 in the event. In many years, athletes have won the ND State Meet with a time slower than 9:32. In this race, 9:32 finished in sixth place. Seniors Diederich and Prusak also competed in the 3200m, with Diederich managing a slight PR (9:57.01) and Prusak finishing in 10:10.70. 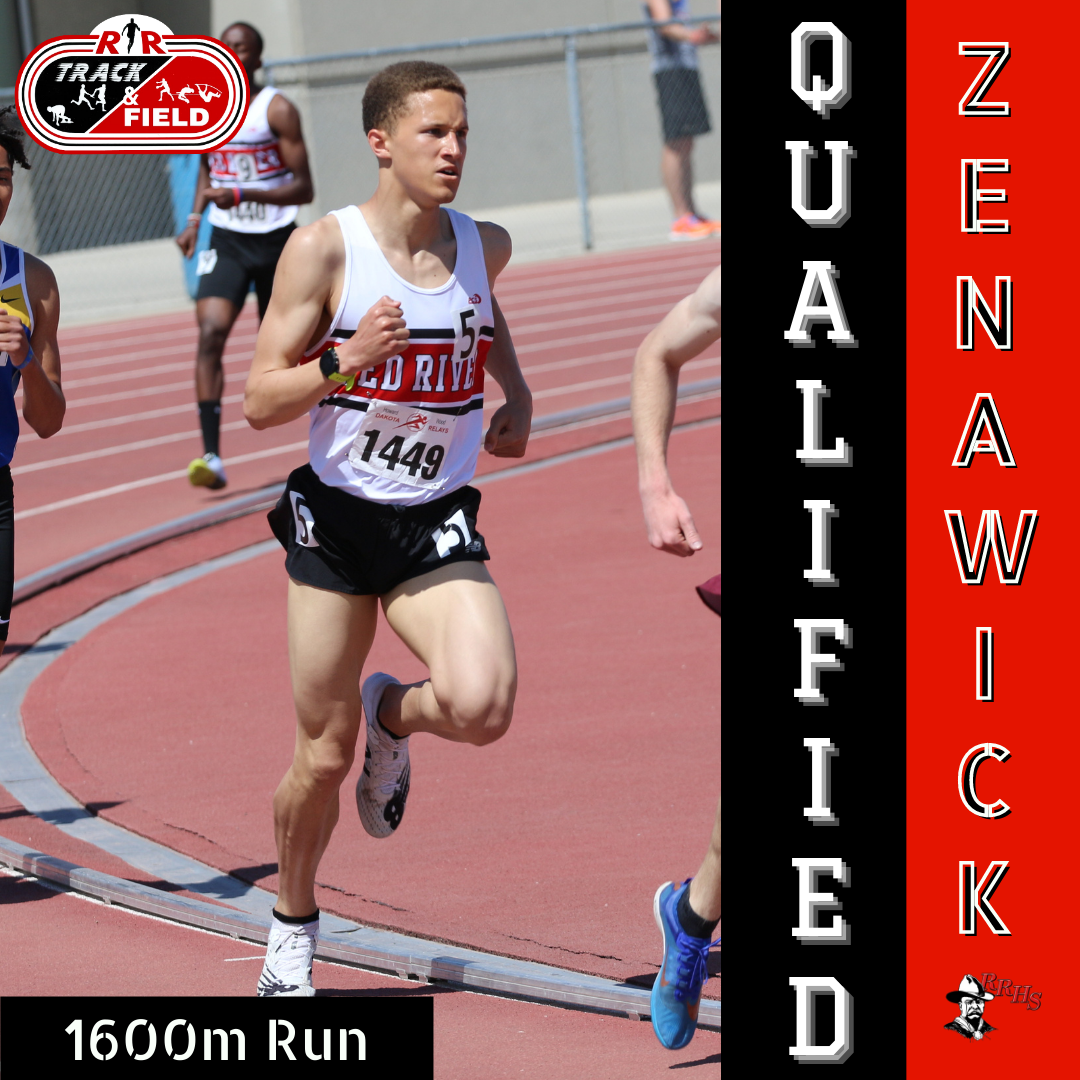 After a couple of very busy weeks, things calm down a bit. We only have one varsity meet this week (Packer Relays-Friday) and one JV meet (potentially-Central Cass Invite) on Saturday.

“That was hard.” -Junior Hunter McHenry, on his record setting 3200m run