Many, many years from now, there will come an evening where old men gather in a once-popular coffee shop, marred by politically-sprayed hashtags and outdated QR codes, to rest and recharge over blue milk, neat, downloaded with their last remaining carbon credit allowances. “I’m proud to stand firm alongside each and every one of you” one will say, laying the remains of his shattered helmet beneath a flickering Touch Tunes that tauntingly emits sports highlights and breakfast sandwich options. The men will lay about, kindling their spirits with tales from a happier time, long ago. But, undoubtedly, the men go quiet, sip from their milk jugs, and slowly close their eyes when one of them resurfaces the memory of that fateful day in May of 2019, Norwegian Constitution Day in fact…”Marcelles Sartwell” the men recall in unison.

For the past three seasons, qualifying for state in the 800m Dash has eluded any Roughrider track athletes. It was a frustrating fact; one that the coaches and athletes were determined to change.

Since the 9th grade, Marcelles has been a locker-room favorite amongst teammates with his team-first attitude, unmatched work ethic, and willingness to leave it all on the track. Heading into Friday’s East Region 800m Run, it appeared the cards were frustratingly stacked against Marcelles. A mysterious foot pain resulted in a week of cross-training. As the week went on, the pain got worse. Sadly, it appeared a stress fracture was eminent. Bravely, he decided he would still give the race a shot at the meet. When he put spikes on before the race, the pain became unbearable. His only option was to run the race in training flats and hope for the best. Coach Dafoe positioned himself on the backstretch in case he had to pull Sartwell from the race.

As the gun went off, Coaches Bakke, Dorsey, and Dafoe weren’t very optimistic that he could accomplish much in so much pain and without spikes. What Marcelles did next was nothing short of remarkable. After hanging on with the lead pack for the first 400, no one thought he could hold on. Not only did Sartwell finish the race Friday, he outkicked most of the field to finish in fifth place (2:04.17). The placing qualified him for next week’s State Meet in Bismarck and ended the 800m drought for the Red River Boys.

Sartwell wasn’t the only Rider to run inspired in the 800m. Sophomore breakout star Mustafe Abdi, who only raced sparingly as a freshman, stuck on the heels of Marcelles the entire race, holding on for sixth place (2:04.68) and booked his ticket to Bismarck. The State Meet might be a busy one for Abdi, who also placed fifth in the 1600 (4:37.47) to qualify. He found himself between senior Jake Arason (4:32.58), who placed third, and in front of senior Zach Simon (7th-4:40.70) and freshman Hunter McHenry (8th-4:40.92). The event netted 12 team points for the boys in red, white, and black. In the 4×400, Abdi ran second-leg, along with leadoff senior-leg Mohamud Yahye, junior third-leg Keandre Anderson, and freshman anchor Amit Rasaily. The team placed fifth in a time of 3:37.82 to qualify. With the addition of the 4×4, Red River will have all four relay teams at State for the first time since 2016.

A Trio of Champions

Junior Kaden Rohloff has been chasing the 14’0 pole vault barrier since he started the event in the seventh grade. On Friday, he finally cleared the elusive height. In the process, he became the 2019 East Region Champion, the first Region pole vault champ since Alex Holmes in 2016, and the fifth in school history. The event was not without a little drama, as Rohloff missed twice at 13’3. Since the only other competitor remaining had already cleared the height, Coach Llloyd reached into his bag of tricks and had Kaden pass to 13’6. Regardless of whether or not he cleared 13’3, Rohloff would have stayed in second place, due to misses. The gamble paid off, after he proceeded to clear 13’6, 13’9, and 14’0. His clearance moves him into a tie for #2 All-Time in school history with the great Paul Helgeson, who graduated in 1985. For now, Mike Compton’s school record of 14’2, the oldest still standing, lives on. 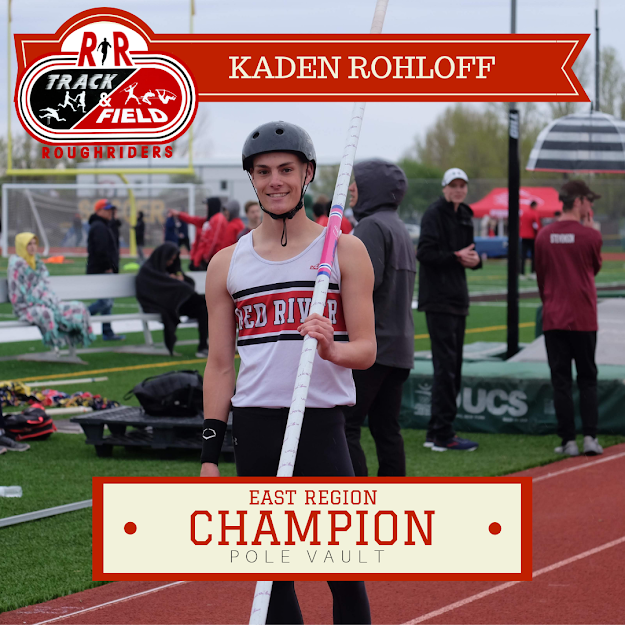 Since 2009, a Red River athlete was won the East Region 110m Hurdles title eight times out of ten. Thanks to Bryce Enerson, you can make that nine of the past eleven. Enerson dominated the event Friday, crossing the line in 15.01 seconds, which was over .5 seconds faster than the runner-up finisher. The time is the second-fastest of his career. He also displayed fine hurdling in the 300m Hurdles, where he placed second with a PR time of 41.24 seconds. In the high jump, he cleared 5’8 to tie for 8th. In total, Enerson racked up 18.5 points to firmly move into the team scoring lead. He sits just shy of 200 points (199.33) heading into next week’s State Meet. Enerson joins an illustrious group of RR East Region 110m Hurdle Champions, one that includes his older brother Tyler. Since 1994, a Roughrider has won the title on thirteen occasions. 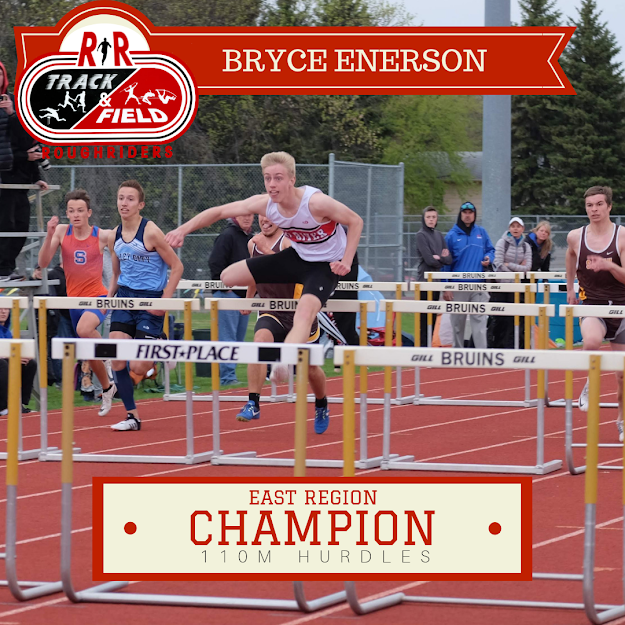 In no event has RR dominated the East Region as much as the javelin throw. Between 2004-2017, a RR athlete won the event in all but two seasons. Riders also won the event in 1991 and 1996-1998. After senior Brett Klefstad’s clutch performance Friday, you can add 2019 to the list. Klefstad sat in third place with one throw remaining Friday. On his last effort, he reached 182’6 of Cass County real estate to take the lead and the title. The PR throw is ranked #3 in ND and sits #11 in school history. Senior Cade Johnson also impressed Friday, hitting a SQ throw of 160’10 to place sixth. The throw was a welcome sight for Johnson, who came just inches short of the 160’0 SQ standard on Monday. He also placed eighth in the shot put with a toss of 45’11. 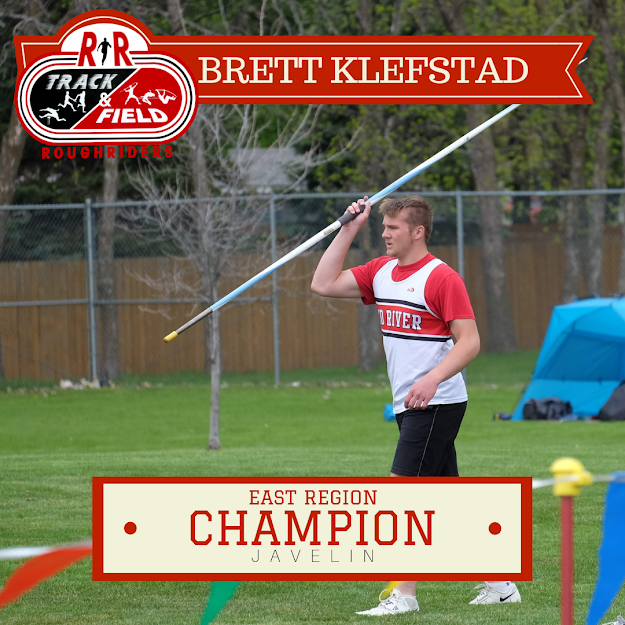 Despite the fine performances from the individuals listed above, a number of Riders did not have their best day Friday. In the team race, local track pundits (of which there are very few), predicted the most balanced competition in East Region history. Although the West Fargo Packers were the favorites on paper, the Riders had beaten them on three occasions. Fargo Davies had edged both RR and WF at the Classic. Furthermore, high-end individuals from Shanley and Fargo North made their teams a threat, especially at Region or State Meets. Quality depth at Fargo South and Sheyenne put their teams in the conversation. In the end, RR finished in sixth place, a disappointing finish for a team that competed at a higher level for most of the season. Although, credit must be given to the teams in front of the Riders, as they competed valiantly and earned everything they got.

In the wise words of famed track coach and “Feed the Cats” creator Tony Holler, “track and field humbles you.” This was grossly evident Friday. Due to unfortunate injuries, seniors Cheyenne Hare (100m) and Alessandro Kroeger (400m) had not competed in three weeks. They gave it their best effort Friday and both were able to finish their races, although it appeared not at full strength. Sadly, their competitive seasons are likely over. Senior Luke Anderson hit a nice shot put PR at the Last Chance on Monday, only to foul all three throws Friday. Klefstad was consistently one of the top placers in the shot put all season, only to find himself outside of finals. The Austin Oehlke to Ethan Brandvold 4×100 exchange clicked all season long before going haywire Friday, resulting in a DQ. Perhaps the cruelest of fates was reserved for Arason. In the 3200m, his signature event, another athlete stepped on his heel 500m into the race. With his spike half removed, he stopped on the backstretch, frantically trying to put his shoe back on. Unsuccessful, he kicked the shoe off and progressed forward for another two laps, significantly behind the lead pack. Realizing he was too far out of the race, he was forced to withdraw and save his foot before causing any further damage. Sometimes when it rains, it pours. It seemed to be that way Friday. Some of these athletes will get another chance to compete next week. Some will not. Nevertheless, each of them deserved a better fate than what transpired Friday. As was said, this sport humbles you.

*Special thanks to Javelin School Record Holder Paul Hoplin and Lee Ostrom at the McLeod County Chronicle for their help and inspiration with this article. Further thanks to Tony Holler and Dr. Frank Zarnowski.

“Kaden stayed focused the entire event.  He was able to make little adjustments that kept him in the competition until he finally took the lead with an outstanding clearance at 14 feet.  It was a lot of fun to watch a terrific competition in less than ideal conditions.”

“Cade had a PR and State Qualifying throw at our second biggest meet of the year. Outstanding effort by the guy who spends more time in the weight room than anyone on our team.”

“Brett had an outstanding come from behind effort on his last throw to claim the East Region javelin title. Brett kept competing, never gave up, and threw his all time PR of 182’6″

Riders Sharpen Up for East Region