The Davies Eagle Relays is a season highlight every year. In this meet, all events are scored relay style. Running races either exchange a baton or add participant’s times for a cumulative performance. Field events add the top three participants’ heights/distances to get a team’s performance. The meet rewards overall team depth, as having one superstar in an event will not guarantee you team points at this meet. With our team’s emphasis on the team aspect of track and field, RR has always finished well.

Several athletes turned in fantastic performances on Thursday. Unfortunately, it seemed that a lot of events didn’t go the way most people had hoped. Despite the fact that a majority of the team had a subpar day, the boys still managed to finish in third place, behind first-place Sheyenne and runner-up Davies. The Riders used a balanced effort and strong depth, as the Distance Medley Relay (DMR) was the only team event win. Second-place finishes were found in the 300m hurdles, 3200m, 1600m, triple jump, and high jump. 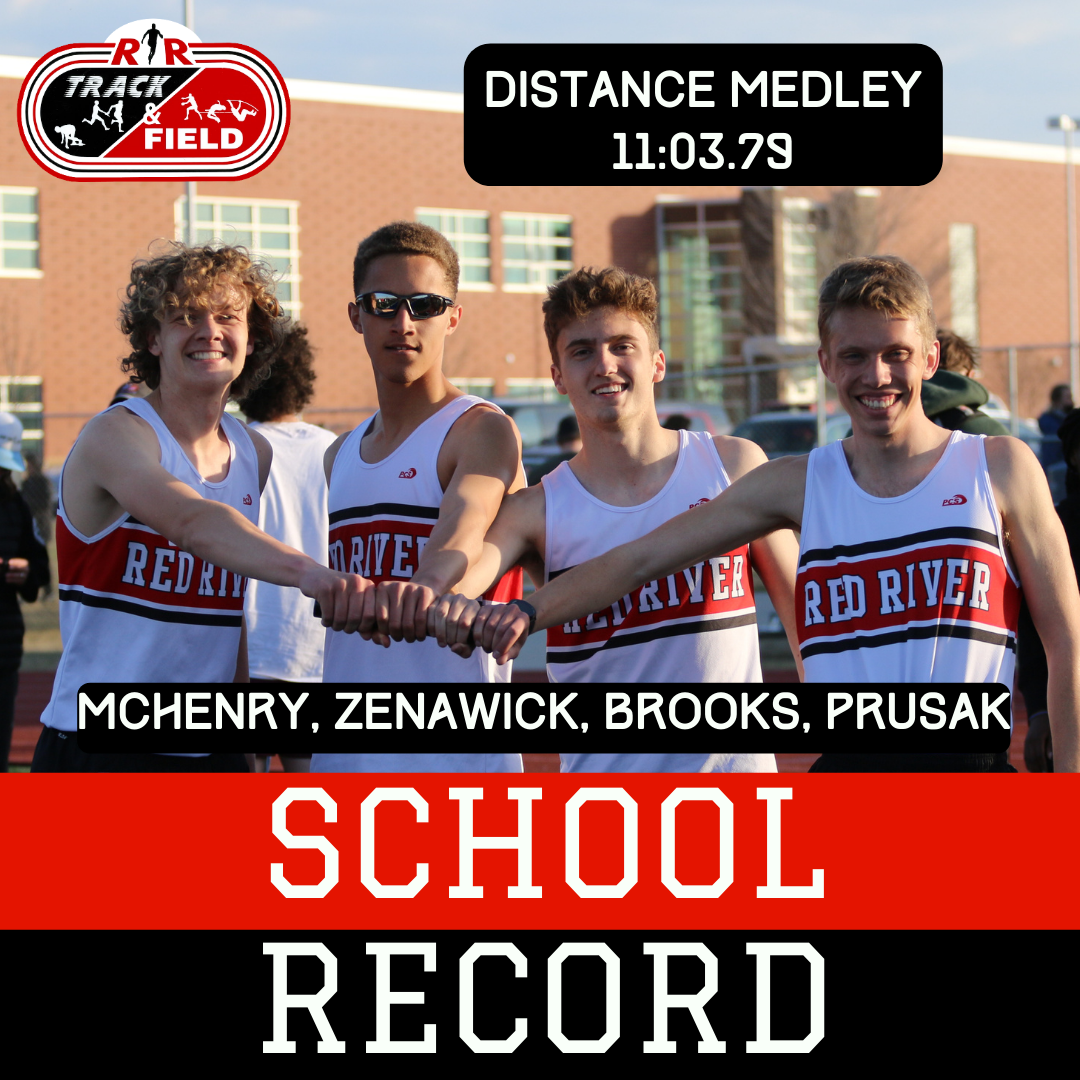 For meet photos-CLICK HERE. If you took any yourself, please add to the album. Be sure to follow Kerry Ring Photography on Facebook or Instagram. He took some phenomenal photos at the meet Saturday!

The aforementioned D-Krew squad has also set their sights on the much more frequently contested 4x800m relay, as this event is actually held at Region and State meets. The team’s main core of half-milers had not yet attempted to qualify in this race in 2021. In their first attempt on Saturday, the boys cruised to victory and surpassed the standard by almost ten seconds, stopping the clock at 8:15.2 (SQ mark is 8:24.24). Their time currently ranks #2 in ND and is the best performance at RRHS since 2004.

“Looking at the boys before the 4×800, there was a quiet confidence about them running a state-qualifying mark, but it was clear that wasn’t their ultimate goal. They each put forth their own personal best split to achieve something special as a team. It is the fastest time I’ve seen at Red River and really set the tone for the rest of the meet.” -Coach Dorsey

In addition to this qualifying performance in the 4×800, senior Broden Diederich became the fourth Rider to qualify in the 3200m Saturday. His time of 9:56.97 is #20 All-Time in school history. Outside of the track, sophomore Logan Arason hit a new PR of 146’7 in the discus, which surpasses the SQ mark of 145’0. The throw is ranked #1 in the East and #5 in Class A.

Diederich offered insight into his performance Saturday: “My main goal going into yesterday was to qualify. Not just because I want to go to state, but it was my last chance to run times to get into Howard Wood next week. For the 3200, I went out very conservative, relaxing with 5:00 first mile. With 10:05 being the hard limit I had to beat, I slowly sped up throughout the second mile. My last lap was my strongest, which allowed me to break 10:00. Overall I thought it was a very well-paced race, but in the future, I may consider going closer to 4:50 first mile. I believe by the end of the season I can reach low 9:40s and this was just the start to my 3200s this year. The 4×8 went well for all of us, however, the four of us agreed that none of us felt fresh. This was due to the meet we had two days before and for myself, the speed workout and poor stretching afterward. However, every one of us ran season-best 800s to make it happen.”

Mustafe Inspires All in 800 Win

Senior Mustafe Abdi had a breakout season as a sophomore in 2019, qualifying for state in four events (800m, 1600m, 4x800m, 4x400m) and running in all four in Bismarck. He was poised for a huge year in 2020, but that season was lost to the coronavirus. Since that time, he has faced a number of setbacks. Despite these challenges, he always displays a positive demeanor, consistent work ethic, and team-first attitude. This has made Mustafe not only one of the most popular students on the team, but throughout RRHS.

With injuries limiting his training and racing up to this point of the season, coaches entered Mustafe in his first 800m Saturday hoping for a starting point, something to build upon for the rest of the season. Mustafe had other plans, outkicking the field and crossing the line in a state-qualifying time of 2:00.80, which ranks #7 in Class A and #17 All-Time at RR. Also crossing the line in a huge PR was sophomore Jonah Dafoe, who just missed the SQ standard (2:01.74) with a time of 2:02.12.

“The 800 was a beautifully executed race by both Mustafe and Jonah. They got out fast, held a strong pace for one lap, pushed through the 3/4 mark and kicked with everything they had. It’s unfortunate that only one could qualify for state on this day,” said Coach Dorsey. “Mustafe had a fantastic finish to pull away for the win, but I’m not sure the State Qual happens if Jonah doesn’t go by him and push it with 200 meters to go. It really shows the importance of competition and teamwork for everyone to race their best.”

Poor weather and limited training spaces left most of the sprinters and jumpers without a quality workout in practice this week. As a result, a large number of athletes were entered in a 4×4 at the Pentangular. This became an important workout for many, but it also served as a tryout to see which athletes might be better served by moving up in distance. Although ten teams were originally entered, one team had to drop. In total, nine teams and 36 athletes ran the 4×4 Friday. Several athletes who were not originally entered stepped up when needed, especially Max McCarthy, Jacob Votava, and Ben Strand. Of course, the final athlete who stepped up for the team was 300 lb. shot put specialist Marshal Buelow, who anchored the J team with an admirable split amidst the roar of the crowd. Coaches, with the help of 8th graders Elijah Dafoe and Eli Zerr, managed to collect splits for all 36 athletes.

It was a tough week, but the Riders saw great performances on both Thursday and Saturday. In total, the team saw over 100 PR’s or season bests at the meets. Fantastic improvements! 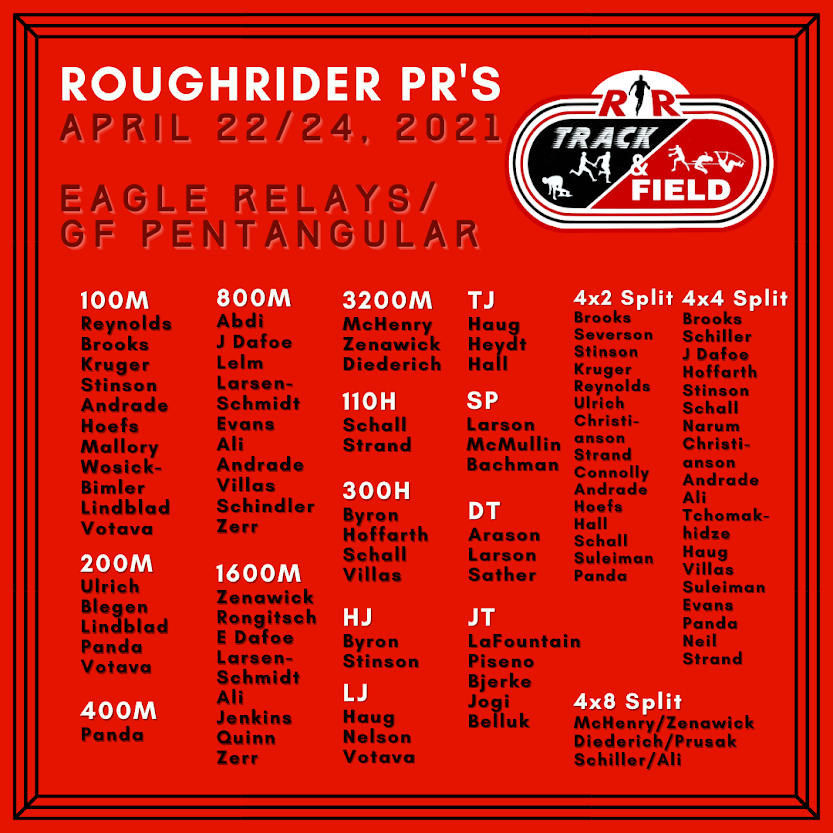 Another busy week for the Riders. There will be meets in three different locations on three different days. Most athletes will either compete on Thursday (Davies JV Meet) or on Friday (Shanley Invite). Some athletes will compete at the prestigious Howard Wood Dakota Relays on both Friday and Saturday in Sioux Falls, SD. Entries and meet info will be sent out in the coming days.

“I’m very proud of this team’s performance at the meet. Our depth and talent is awesome to witness firsthand. I’m especially proud of Mustafe’s performance. To run such a great time while fasting is extremely impressive. Towards the end, I saw many inexperienced guys, like Marshal, run their first 400 meter dashes and perform great. To see them step up and try something new made me really proud to be on the team.”- Senior Co-Captain Ted Tchomakhidze

“Now that we have qualified the 4×8, our goal is focused on the school record. We ran the fastest 4×8 in 17 years (2004) and there’s only room to improve. I paced my 800 poorly, going out on a 57! So with more even splits there is no telling what more I can do and how the rest of the team will improve. Howard Wood should also introduce some stiffer competition for us all to chase after.” – Senior Broden Diederich

“When I was running with kids half my size, hearing everyone roar while cheering my name, I realized it’s a lot further than it looks. I tried just chugging along, making my way. It’s a new PR for me that I might need to beat whenever someone else is hurting and I take their place!” – Senior Co-Captain Marshal Buelow, on his first 4×4 experience